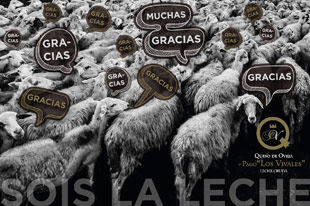 This 2017 has been a year of great success for Pago “Los Vivales” Artisan Cheese, being rewarded by up to 9 Best Cheese international awards. Moreover, on top of that, Pago “Los Vivales” achieved the distinction of the Best Livetock Farming of its region, Castilla y León.

At the Global Cheese Awards 2017, Pago “Los Vivales” – Black Label got a strike, being awarded in every category it showed. This cheese got two different Gold Medals (“Best hard-pressed sheep cheese” and “Best Continental Hard-Pressed Cheese”) and two Silver Medals (“Best artisan Cheese 100% sheep cheese” and “Best Spanish Cheese”). Furthermore, it was also selected as the Best Continental Cheese of the contest.

Few weeks later, at the World Cheese Awards 2017-18, (considered the most important Cheese contest on the world), Pago “Los Vivales” achieved up to 4 different distinctions, including: four gold medals, one silver medal and one bronze medal. The Black Label and the Silver Label cheeses were both rewarded by a Gold Medal, the Burgundy Label Cheese by a Silver Medal and the Green Label by a bronze medal.

Likewise, the responsible company of Pago “Los Vivales” artisan Cheese, Baltasar Moralejo e Hijos S.R.L., obtained the II Premio Surcos to the Best Livestock Farming of Castilla y León (Spanish Region of origin), showing up the importance that its own sheep have on its cheese elaboration. That is because Pago “Los Vivales” only uses the un-pasteurized milk coming from their own sheep to make cheese.